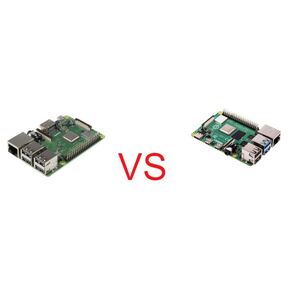 The new Raspberry Pi 4 is the newest and it represents a massive leap in capabilities compared to previous models. It’s crazy to think the original model only had a single-core processor, 256MB of RAM, and one USB slot.

In terms of power, the Raspberry Pi 4 is a major step up from its predecessor, offering four heavy lifting Cortex-A72 CPU cores compared to the older model’s four Cortex-A53 cores.
The Cortex-A72 cores are old by smartphone standards, being used in the likes of the Snapdragon 650, Snapdragon 652, and Kirin 950. But they deliver a ton more grunt compared to the Cortex-A53 cores, which are designed for low-power tasks. In fact, the Raspberry Pi Foundation says you can expect a 3x performance boost over the previous model.
We also see a Raspberry Pi available in several RAM options for the first time in the series, starting at 1GB for the base model, 2GB for the middle option, and 4GB of RAM for the top-end option. Meanwhile, the Raspberry Pi 3 Model B+ is only available in the 1GB RAM flavor. Even if you opt for the base Pi 4, you should still see some gains thanks to the use of LPDDR4 memory in the new model compared to LPDDR2 in the older device.
The Raspberry Pi Foundation is positioning the Pi 4 as a PC alternative due to these upgrades. It’s tough to argue with this, unless you need a powerful machine for video editing, PC gaming, and other demanding tasks.

In addition to the CPU upgrades, the Raspberry Pi 4 receives a welcome graphics refresh compared to the Raspberry Pi 3 Model 3B+. The new model sports a VideoCore VI GPU as opposed to the predecessor’s VideoCore IV graphics. In fact, this marks the first time the VideoCore IV GPU isn’t used in a Raspberry Pi. The new GPU brings a bump up to OpenGL ES 3.x, as opposed to OpenGL ES 2.0 on the older models. It also delivers a 500Mhz clock speed compared to the older GPU’s 250Mhz to 400Mhz speeds.
Video capabilities also see a big leap with the Raspberry Pi 4, as we’ve now got 4K support for the first time (4K/60fps, at that) You also have dual 4K monitor support via a pair of microHDMI ports. Unfortunately, this has come at the expense of a full-sized HDMI port, so if you absolutely can’t do without the standard HDMI port, then you might want to stick with the Raspberry Pi 3 Model B+.

Speaking of ports, the Raspberry Pi 4 has a few other changes compared to the older model. Aside from the switch from a full HDMI port to two micro ports, the USB ports have also received some love. The new model sports four USB ports, with two of them sporting USB 3.0. This is a notable upgrade over the last model, which only featured four USB 2.0 ports.
The Raspberry Pi Foundation has also swapped out the microUSB port for power in favor of a USB-C port (offering 500mA of extra current). Chances are good that you can use your phone’s USB-C charger, although you need 15-watt charging for best results.
Another port upgrade is in the support for Gigabit Ethernet via the ethernet port. This is a welcome change from the Raspberry Pi 3 Model B+, which only supported the standard via USB.

The biggest connectivity upgrade you have when comparing the Raspberry Pi 4 to the Raspberry Pi 3 Model 3B+ might just be the switch from Bluetooth 4.2 to Bluetooth 5. The new standard offers quadruple the range and roughly double the speed over the legacy option.
It’s also worth noting that Bluetooth 5 uses much less power than Bluetooth 4.2. Sure, many people aren’t running a Raspberry Pi with a battery, but this should result in reduced power draw anyway.